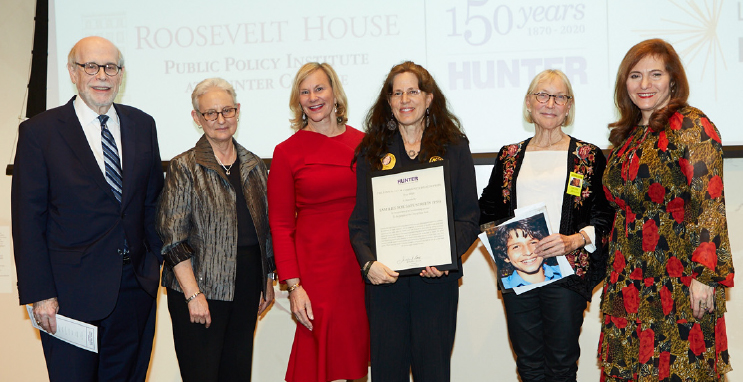 The Joan H. Tisch Distinguished Fellow in Public Health was a five-year program that supported fellows from around the United States and the world, enabling them to share their expertise with their fellow academics, students, the public, and outside experts. Fellows taught undergraduate and graduate students, conducted faculty seminars, and served as scholars-in-residence in the Hunter community. Programing included panels bringing together experts on emergency recovery post Sandy, policy makers and experts on urban planning for environmental sustainability and New York City public health issues.

2013: Dr. Richard Jackson, a leader in examining the impact of the built environment on public health.

2012: Professor Sue Atkinson, the first Director of Public Health for London and Health Advisor to the Mayor and Great London Authority.

2010: Dr. John McDonough, a senior advisor on Health to the U.S. Senate and an influential figure in advancing national health care reform.

Each Fellow undertook work that led to publications and high-level advocacy that has exerted an influence on public policy. For example, Dr. McDonough wrote a book, Inside National Health Reform, which provided a behind-the-scenes look at the development of the Affordable Care Act; Dr. Benjamin wrote The Quest for Health Reform: A Satirical History, which used the tradition of editorial cartooning as a medium for contemporary commentary and the long-standing effort to achieve universal national health reform; and Dr. Farley wrote Saving Gotham, A Billionaire Mayor, Activist Doctors, and the Fight for 8 Million Lives.

Since the first prize was announced in 2011, the Tisch Prize has become an increasingly sought-after honor, known throughout New York City as the award for leaders of grassroots public health organizations. The Prize validates and empowers these unsung heroes and their vitally important organizations, leading to increased recognition and often greater funding. As all former awardees are invited to Prize events, some have established relationships that have led to fruitful collaborations in their public health areas. The Prize has also been impactful at Hunter College, where many awardees have become mentors to our students, inspiring them to consider careers in public health.

2011: The Union Settlement Association and Dr. Melony Samuels, Founder and Executive Director of Campaign Against Hunger.

Learn about the Recipients of the Joan H. Tisch Community Health Prize.