Displaying all results for tag: huntercollege 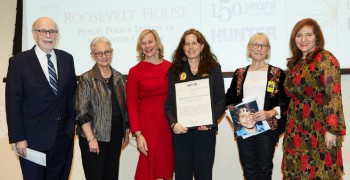 The Illumination Fund and Hunter College created the Joan H. Tisch Community Health Prize in 2011, as part of a multi-faceted project to honor Joan Tisch’s legacy of leadership and philanthropy, including her key role in expanding Gay Men’s Health Crisis. The annual prize honors not-for-profit organizations and individuals for distinguished accomplishment in the field of urban public health. Since the first prize was announced in 2011, the Tisch Prize has become an increasingly sought-after honor, known throughout New York City as the award for leaders of grassroots public health organizations. The Prize validates and empowers these unsung heroes and their vitally important organizations, leading to increased recognition and influence.