First Randomized, Controlled Trial on the Impact of Movement for Survivors of Intimate Partner Violence Conducted by Gibney, Sanctuary for Families, and Teachers College, Columbia University 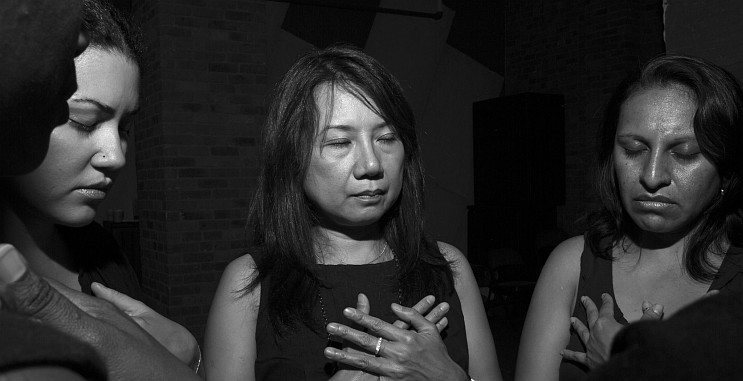 New York, NY, August, 16, 2022 – A new study, “Exploring a Dance/Movement Program on Mental Health and Well-Being in Survivors of Intimate Partner Violence During a Pandemic,” has shown that the participants’ symptoms of PTSD and psychological distress measurably lessened over the course of a 12-session virtual movement program. Funded by the National Endowment for the Arts as well as the Laurie M. Tisch Illumination Fund as part of the Fund’s Arts in Health initiative, the study is the first randomized, controlled study exploring the impact of dance and movement on the mental health and well-being of survivors of intimate partner violence, also known as domestic violence. It was conducted through a partnership between the New York City-based dance and social justice organization Gibney; Sanctuary for Families, a non-profit organization dedicated to aiding survivors of domestic violence, sex trafficking, and related forms of gender violence; and Teachers College, Columbia University, a graduate school of education, health, and psychology.

Gibney’s Move to Move Beyond™ program was launched in 1999 in partnership with Sanctuary for Families. Move to Move Beyond™ is an evidence-based program that offers the transformative power of movement to survivors of intimate partner violence and their families and provides an environment for positive physical expression and community building. Core tenets of the program model, such as honoring choice and bodily autonomy, offer survivors somatic tools to support their healing journey:

“Move to Move Beyond™ was created through a thoughtful collaboration between dancers, survivors, and social workers. We set out to create a trauma-informed way to offer movement as a tool for survivors and it has been beautiful to see the work and its impact grow and evolve over time,” said Gina Gibney, Founder, Artistic Director, and CEO.

Core tenets of the program model, such as honoring choice and bodily autonomy, offer survivors somatic tools to support their healing journey:

“I really enjoyed the movement… being able to put my own words and my own feelings into movement,” said one participant in the study. “I felt like that helped me to express myself a little bit better and to be able to say what I didn’t really know how to say.”

According to renowned Harvard University trauma expert Judith L. Herman, M.D.’s work, trauma creates disconnection from self and others. Rebuilding healthy connections, therefore, is an important component of recovery. During the study’s focus group interviews, participants shared that movement was that bridge for them:

“I found myself really connecting to the music and to giving myself that time to connect… to my body, which I had disconnected from for a long time,” said one participant.

“The increase in intimate partner violence during the pandemic was widely reported,” said Dr. Allison R. Ross, Deputy Clinical Director at Sanctuary for Families. “Research continues to show that intimate partner violence has an ongoing negative impact on the wellbeing of survivors and increases the risk for development of mental health disorders that include depression, low self-esteem, psychological distress, and Post Traumatic Stress Disorder (PTSD).”

“Our aims were to determine the feasibility of delivering a virtual dance/movement workshop program, to examine the effects of the program on symptoms of PTSD and psychological distress, to determine whether heart rate variability, a measure of the body’s stress responses, improves as a result of participating in the program, and to describe the individual and shared experiences of participants of the program,” added Dr. Carol Ewing Garber, Professor of Movement Sciences, Director, Graduate Program in Applied Physiology at the Teachers College at Columbia University.

“Through our ongoing Move to Move Beyond™ program, we have observed improvements in mental and physical health among the participants,” said Yasemin Özümerzifon, Senior Director of Community Action at Gibney. “It’s extremely rewarding to know that these programs can also be effective when conducted in a virtual format, and to have the results of this study confirm what we’ve seen in terms of the benefits to the participants.”

Findings from the study of the Move to Move Beyond™ program model suggest that dance and movement can have a meaningful and effective role in addressing trauma. These results encourage providing trauma-informed movement workshops for survivors of intimate partner violence as a complementary tool to the essential social services provided by domestic violence agencies.

STUDY OVERVIEW
In the study, 45 women ages 23–48 years were randomly assigned to a 12-session virtual creative dance/movement program or a usual care control group. Each group completed questionnaires about PTSD and mental health symptoms, general health, physical activity, and underwent a brief measurement of heart rate variability. A subset of the intervention group participated in a semi-structured focus group. The virtual format of the study launched in December 2020. Data collection took place throughout the pandemic and concluded in August 2021.

KEY FINDINGS
The results of the study showed that the survivors of intimate partner violence who participated in the virtual workshops experienced improved mood and reduced tension. They found new ways to express themselves, attune to their bodies, learn new self-care habits, and build community as they engaged in the workshops. Over the course of the study, the participants’ symptoms of PTSD and psychological distress lessened. There were no detectable changes in heart rate variability.

APPLICATIONS AND IMPLICATIONS
The study showed feasibility and acceptability of a movement/dance program provided in an online format during the global COVID-19 pandemic, wherein many participants were most likely experiencing additional traumatic events. Survivors enjoyed the workshops and found they felt better after participating in the program. A number of participants shared that they were integrating some of what they learned during the workshops into their daily lives. Participation resulted in improvements in some mental health symptoms and overall well-being.

With this finding, there is an opportunity to expand the framework nationally to offer access to this model of somatic healing to more survivors of intimate partner violence as a way to increase the range of resources available to them. Further, this framework may also inspire utilizing collaborative, interdisciplinary partnerships to address complex health issues, such as trauma. Implementation of this model on a larger scale and continued study of the ways that movement impacts a person’s healing journey when they experience trauma would be valuable to add to the current body of knowledge.

Funding for Exploring a Dance/Movement Program on Mental Health and Well-Being in Survivors of Intimate Partner Violence During a Pandemic was provided by the National Endowment for the Arts and the Laurie M. Tisch Illumination Fund.

The article on the study is in Frontiers of Psychiatry:

Gibney
Founded by Gina Gibney in 1991, Gibney is a New York City-based performing arts and social action organization that taps into the vast potential of movement, creativity, and performance to effect social change and personal transformation. Gibney’s trauma-informed Move to Move Beyond MTMB™ workshop model was originally created in 1999 in partnership with Sanctuary for Families by bringing together the strengths of dancers and social workers. Dancers through years of training focus on expressing themselves using their bodies and building community using movement, and social workers hold particular expertise in providing mental health support and recovery to survivors. Hundreds of free MTMB™workshops are offered annually to individuals and families who are on journeys to healthier futures, and a virtual model of our Move to Move BeyondTM workshops was also created in response to COVID-19 and its negative impact on survivors.

Sanctuary for Families
Sanctuary for Families is New York’s leading service provider and advocate for survivors of domestic violence, sex trafficking, and related forms of gender violence. Every year, Sanctuary empowers thousands of adults and children to move from fear and abuse to safety and stability, transforming lives through a range of comprehensive clinical, legal, shelter, and economic empowerment services.

Furthermore, through education, awareness-building, and advocacy initiatives, Sanctuary educates the public about gender violence and the resources available to survivors while promoting improved policies and practices at the local, state, national and international levels.

Teachers College, Columbia University
Teachers College, Columbia University is a graduate school of education, health, and psychology, founded in the late 19th Century. It was founded on the proposition that education alone can’t correct our society’s inequalities — that to maximize the life chances of all people, we must also support poorer communities’ physical and nutritional health and psychological wellbeing. Thus, fields such as education psychology, nursing education, nutrition education, special education, conflict resolution and spirituality and education were created at TC, and for more than a century it has prepared psychologists, movement scientists, nutritionists, health educators, speech pathologists and other professionals, as well as teachers and school leaders. The Movement Science & Education program approaches the study of movement from a multidisciplinary perspective. Its focus is on the practical applications of science and theory in the laboratory, clinic, school, and community. It has a particular focus on the promotion of physical activity in diverse populations and research about the effects of physical activity on the brain, physiological processes, physical and mental health, and overall well-being.