Sustaining NYC’s Immigrant Arts Ecosystem Through Crisis and Beyond

Immigrant artists are increasingly essential to the creative landscape of New York City. But now the livelihoods of countless immigrant artists—and the survival of the cultural organiza­tions that champion their work—are facing major threats.

The Changing Face of Creativity in New York, a new report, by the Center for an Urban Future, supported by the Illumination Fund along with the Rockefeller Brothers Fund and New York Community Trust, provides a new level of detail on the landscape of immigrant arts in New York City— and what’s needed to sustain immigrant arts com­munities across the five boroughs.

Each new decade brings a fresh wave of concern that New York City risks losing some of its cultural spark. Even before the coronavirus pandemic hit, New York’s soaring cost of living and the lure of cities from Baltimore to Berlin had threatened the city’s position at the apex of global culture. At the same time, a powerful, growing force of cultural vibrancy has reenergized the city in recent years and sharpened New York’s creative edge: immigrant artists.

Foreign-born artists have long been here, birthing world-altering movements from abstract expres­sionism to hip-hop. More than any previous era, however, immigrants have become pivotal to the success of the arts in New York. The number of immigrant artists has grown 69 percent since 1990, compared to a 30 percent increase in U.S.-born artists. The ranks of immigrant producers and directors, writers, and photographers have all doubled since 1990, while the number of immigrant actors has grown by almost 150 percent. Today, the city is home to 12 percent of the nation’s immigrant artists, far more than any other U.S. city. Across multiple disciplines, immigrants burnish the city’s global reputation for artistic excellence, from the nine New York-based, foreign-born artists who were featured in last year’s Whitney Biennial to the five 2019 Bessie Award-winning immigrant dancers and choreographers, to hip-hop superstars like Trinidad-born, Queens-raised Nicki Minaj.

But now the livelihoods of countless immigrant artists—and the survival of the cultural organiza­tions that champion their work—are facing major threats. Without the benefit of endowments or large donor bases to help cushion the blow, many immigrant-led and immigrant-serving arts organizations are facing fiscal catastrophe, reporting revenue losses amounting to 50 percent or more of their annu­al budgets. These organizations were particularly vulnerable to financial shocks before the pandemic hit, with the average ethnic arts nonprofit bringing in just one-third the government funding and less than 7 percent of the board contributions received by mainstream peer organizations. Meanwhile, many immigrant artists have struggled to access government relief, even as income from exhibitions, perfor­mances, and side jobs has all dried up.

While city support for immigrant arts had increased in recent years, that funding is now in jeopardy: the city’s 2021 budget cuts more than $23 million from the Department of Cultural Affairs and slash­es funding for Council discretionary initiatives by $79 million—funding that many immigrant-serving arts organizations rely on.

Absent a new level of support, New York risks losing its status as a beacon of cultural exchange and innovation, and jeopardizing its prospects in a daunting economic recovery. To continue attracting and sustaining brilliant creators from across the world—and keep pace with cities like Los Angeles, Houston, and Miami that are now experiencing far faster growth in their immigrant artist communities—city pol­icymakers and cultural leaders will have to do far more to help immigrant artists and arts organizations to survive the current crisis and weave new strength into the cultural fabric of New York City.

This report provides a new level of detail on the landscape of immigrant arts in New York City— and what’s needed to sustain immigrant arts com­munities across the five boroughs. Funded by the New York Community Trust, the Laurie M. Tisch Illumination Fund, and Rockefeller Brothers Fund, the report builds on the Center for an Urban Fu­ture’s previous research about the vital role of the arts in New York’s economy, including the 2015 Creative New York study. The report documents the essential contributions of immigrant artists to New York City, identifies the core challenges facing im­migrants in the arts both before and amid the cur­rent crisis, and advances more than a dozen specific recommendations to support immigrant artists and immigrant-serving arts organizations and strength­en the city’s creative future. It was informed by ex­tensive data analysis and interviews with over 100 New Yorkers, including immigrant artists, directors of immigrant-led cultural and social service organi­zations, leaders of other cultural institutions, art critics, creative professionals, and government offi­cials, among many others. 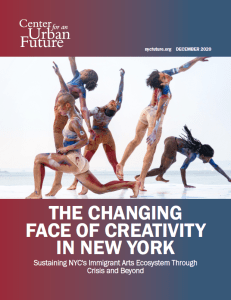