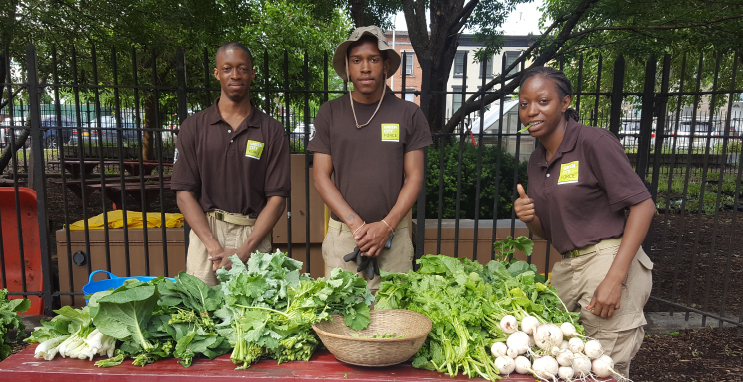 Green City Force provides workforce training and leadership development for residents of public housing, ages 18 to 24, through an AmeriCorps public service model. The training focuses on environmentally linked skills for jobs in the “Green Economy.” Green City Force’s Urban Farm Corps members gain skills and receive additional training to launch their careers and become community leaders. Since the program began, 118 NYCHA residents have been Urban Farm Corps members; of the most recent cohort of Corps graduates, 96% were in jobs or college within one month.

The New York City Mayor’s Office of Strategic Partnerships created the Building Healthy Communities initiative as a public-private partnership to expand efforts to address health disparities in low-income neighborhoods. Building Healthy Communities is focused on three main goals: increasing access to healthy food, increasing opportunities for physical activity and promoting public safety. Farms at NYCHA is one of Building Healthy Communities’ flagship components. The City identified five NYC Housing Authority (NYCHA) public housing developments that had available space, and established a plan to build urban farms in those locations. The model was based on a pilot farm created in 2013 by Green City Force, an AmeriCorps service organization that prepares young NYCHA residents for careers in the “green economy.” Green City Force hires cohorts of 18- to 24-year-old NYCHA residents in a 10-month Urban Farm Corps program and provides both technical and academic training. The pilot farm – and Green City Force’s first cohort of the Urban Farm Corps – was at Red Hook Houses, Brooklyn’s largest public housing development. But the City needed philanthropic support to undertake the expansion to other sites.

Farms are now operating at the original site at Red Hook Houses, as well as Howard Houses in Brownsville (Brooklyn), Bay View Houses in Canarsie (Brooklyn), Wagner Houses in East Harlem (Manhattan), Forest Houses in Morrisania (the Bronx), and Mariners Harbor in Staten Island – each in collaboration with community partners.

Training for Jobs and Career Paths

Although many Urban Farm Corps graduates end up getting jobs related to urban agriculture, the training isn’t solely focused on this field. Rather, the training is designed to provide transferable skills and experience, including:

Their public service experience is designed to expose Corps Members to and enter careers in the green and clean energy economy in industries such as energy efficiency, sustainable construction, solar, urban farming, composting, and public health. While some Corps Members go straight to internships or jobs, others choose to go to college or pursue other educational opportunities.

The development of each farm followed several months of engagement with resident councils and local organizations. It was necessary to build trust and identify needs and interests rather than swoop in to build a farm. Today, residents give input on the crops grown at their local farms; if they provide volunteer hours or donate food scraps for composting they receive free fruits and vegetables harvested on site. Partnering with local stakeholders at each site, the Urban Farm Corps works to design programming such as farm season kickoff, weekly farm stands, farm-based learning for local students, cooking demonstrations and harvest festivals. The Urban Farm Corps members have become ambassadors in the community for healthy eating. As residents of NYCHA housing elsewhere in the City, they are recognized as peers, which provides credibility and establishes mutual respect.

Farms at NYCHA is being evaluated by the CUNY Urban Food Policy Institute, which is tracking employment, food production, resident engagement, behavioral change and other dimensions.

Twenty-eight members of GCF Cohort 14 graduated in March 2018. Within less than a month after graduation, 96% were already placed in jobs and college, the highest placement rate yet for a cohort of GCF Corps Members. GCF also surveyed its Cohort 12 members, who graduated in 2017, for one-year retention rates for employment or college: 92% of respondents reported that they had retained employment or remain in school a year after graduation.

Through this partnership, the city is making a visible and tangible investment in its public housing properties, activating open space, providing valuable work experience and income, and increasing NYCHA residents’ access to healthy food.