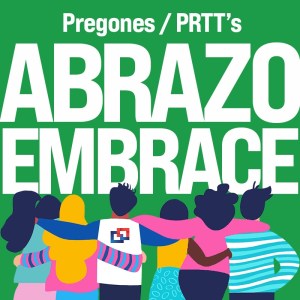 New York – August 31, 2022 – Pregones / Puerto Rican Traveling Theater is proud to announce its first public performances in a two-year initiative for improved community wellness and mental health in the South Bronx. Abrazo / Embrace originated in local conversations about challenges brought on or exacerbated by the coronavirus pandemic over the past two years. The idea is to welcome New Yorkers back into intimate live theater experiences that hold up a loving mirror and lift stories full of empathy, catharsis, and humor.

Four sharp and funny short plays by Puerto Rican writer Alejandra Ramos Riera take the stage on September 9-14, 2022. Performances are in English and will take place at Pregones Theater, located on 575 Walton Avenue in The Bronx. Admission is free with RSVP and capacity is restricted to only 40 persons per sitting to make it all the more cozy and special. Reserve your spot online at pregonesprtt.org or call 718-585-1202. 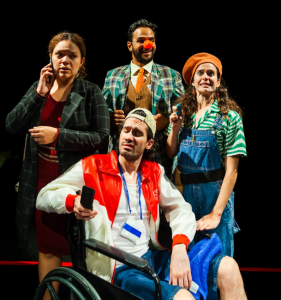 MORE ABOUT ABRAZO / EMBRACE:
“The first year of COVID-19 brought a mix of unprecedented and familiar challenges to our theater and the communities we serve,” says Jorge B. Merced, Pregones/PRTT Associate Artistic Director. “The pandemic was everywhere disruptive of daily life. In New York City and The Bronx, its impact is deeply felt by working families and people of color often with tangible ties and obligations overseas, oversize responsibility as essential workers, and little or no financial safety net. Many of our theater artists and patrons have voiced concerns about shame, depression, and anxiety being shot through the roof. This project is a way to help us all move forward in health.”

Abrazo / Embrace builds on Pregones/PRTT’s significant prior experience producing and performing issue-based theater in Spanish and English. Starting in the late 1980s, the company adapted Augusto Boal’s interactive forum theater technique to share critical information and assist Latinx communities in the fight against AIDS. That project was named The Embrace. Later, from 2005 to 2015, the artists of Pregones/PRTT developed five short plays tackling domestic and relational violence in immigrant, youth, elderly, and LGBTQIA+ contexts. Those shows were successfully presented in partnership with cultural affinity groups, community centers, schools, and CDCs. The need for thoughtful and hyperlocal theater- based interventions remains today.

“Initiatives around mental health and wellness are extremely important in the Bronx community,” says Felipe Balado, Employment and Education Specialist at CAMBA, a multi-service agency serving the local community. “I know the struggles our residents are facing. More work loss and impairment are caused by mental illness than many other chronic conditions. Pregones/PRTT’s Abrazo / Embrace something that will provide hope and help carve additional space and awareness for taking care of ourselves.”

In the South Bronx, where Pregones/PRTT plays the role of arts and cultural anchor, displacement of working families and individuals also accelerated during pandemic, and that the demographics of the area will be significantly reshaped in coming months and years. Abrazo / Embrace is also positioned to be a resource at this time of multiple rapid changes.

“This project is essential and vital because it will help in the healing from the trauma of separation and assimilation,” says Isabel De La Rosa, Captain at Bronx Sole, a wellness organization whose motto is Your Health, Your Hood, Your History. “The project can hopefully further strengthen and enhance the resilience that has made The Bronx community a force to be reckoned with.” Kaleena Clarke, also Captain at Bronx Sole, adds that “[Abrazo / Embrace] will allow the Bronx community to process their feelings and emotions surrounding the pandemic and its effect on their lives, in a safe space. It will help them see that they are not alone and to feel empowered to not only seek help but where to find it.”

Connecting individuals and families with existing wellness and mental health resources already available to them is one of the goals of Abrazo / Embrace and of Pregones/PRTT’s prior issue-based theater work. “The health challenges in our population today require innovative and outside of the box thinking and action,” says Dr. Miguelina Germán, Director of Pediatric Behavioral Health Services and Director of Staff Emotional Support at Montefiore Medical Group. “Montefiore Einstein is proud to work with Pregones / Puerto Rican Traveling Theater on the Abrazo / Embrace project addressing mental health within the world of performing arts. This project will help us raise awareness and connect our population to resources to help manage their mental health in an alternative way.”

performed consecutively throughout the theater

– A hypochondriac and a clown with Tourette’s meet in an elevator. Together, they transform their shortcomings into a celebration of life.

– A woman interrupts a man about to commit suicide. The absurd dialogue that ensues between them uncovers their shared need for affection.

– A woman with limited social skills, looks for a different way to relate to others. Her search for connection goes beyond anything she expected.

– Two strangers at the train station: she’s in a hurry and he’s got all the time in the world. Now they must learn to tolerate each other.