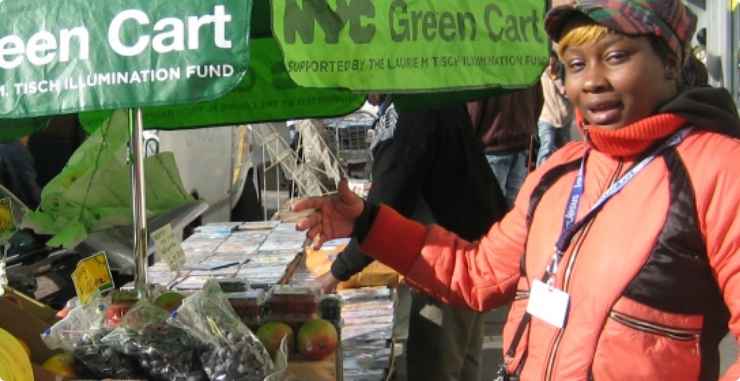 The Illumination Fund funded the launch and growth of the NYC Department of Health and Mental Hygiene’s (DOHMH) NYC Green Cart Initiative in 2008 with a leadership grant of $1.5 million to increase the availability of fresh fruits and vegetables in neighborhoods where access is a challenge and there are high rates of diet-related diseases. The goals of the NYC Green Cart Initiative, a bold blend of public policy, private philanthropy and grassroots entrepreneurship, are to increase access to healthy food and to create jobs.

There are about 500 active Green Cart permits throughout the city, and because many vendors sell with family members or hire employees, the Green Cart Initiative created an estimated 900 jobs. The number of Green Carts has grown each year since the Initiative started, and new vendors keep coming into the program.

Karp Resources has provided technical and business assistance for Green Cart vendors and prospective vendors in more than 80 workshops. With the New York State Farmers Market Federation and USDA support, Karp has also connected more than 90 vendors with Electronic Benefit Terminal (EBT) machines that accept food stamps. Assistance to over 300 vendors is provided in English, Spanish and Bengali.

New York City’s annual Community Health Survey indicates a significant increase in the consumption of healthy foods since the start of the Green Cart Initiative. In high-poverty neighborhoods served by the Green Carts, the percentage of adults who said they ate no fruits or vegetables in the previous day dropped from 19 percent in 2004 to less than 15 percent in 2010.

Community outreach staff at DOHMH builds partnerships with a range of other community organizations through presentations, phone campaigns and other methods to enable these organizations to work directly with vendors and increase their exposure within the community. In 2011, DOHMH partnered with City Harvest’s Healthy Neighborhoods Initiative to hold 36 street cooking demonstrations in partnership with Green Carts in Bedford-Stuyvesant and the Bronx.

This initiative is inspiring creative solutions and collaborations in other cities, including Philadelphia, Washington D.C., San Jose, Los Angeles and even London.

In the wake of Hurricane Sandy, the Illumination Fund granted $85,000 to the Business Outreach Center Network (BOCnet) for a Green Cart Vendors Emergency Fund, which is pairing small monetary assistance with free business resilience training.

A major study of the New York City Green Cart Initiative undertaken by Columbia University’s School of International and Public Affairs (SIPA) concluded that the Green Carts initiative has been reaching key goals in improving access to healthy foods in targeted neighborhoods. The Illumination Fund commissioned SIPA as an independent evaluator to assess the economic viability of Greens Carts as small businesses and consider the role of philanthropy in promoting and supporting innovative public policy. The study was conducted by a team of researchers led by Ester P. Fuchs, a professor of international and public affairs and political science at Columbia SIPA and Sarah Holloway, a lecturer in international and public affairs at Columbia SIPA.

Key findings of the report indicate that the NYC Green Cart initiative is: 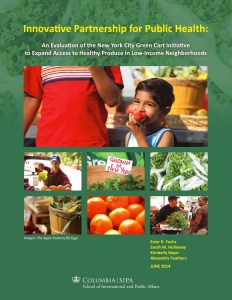 In addition to supporting the NYC Green Cart program itself, the Illumination Fund has created multiple enhancements to increase awareness and impact of the program within both local communities and the general public:

The Illumination Fund and the James Beard Foundation collaborated to create the NYC Green Cart Fresh Food Pack, with recipes featuring fruits and vegetables commonly found on Green Carts. The recipe cards are in English and Spanish and authored by renowned New York chefs, healthcare institutions, and Green Cart vendors and customers. The primary goals of the recipe pack are to provide tasty, relevant, and healthy recipes based on fresh ingredients to folks living in high-need communities and to drive customer traffic to Green Carts. More than 20,000 Fresh Food Packs have been distributed through community-based organizations and by Green Cart vendor themselves, and you can download the Spring-Summer and Fall-Winter NYC Fresh Food Packs for free.

Prior to producing the Fresh Food Pack, the Illumination Fund also created the NYC Green Cart Cookbook in March 2011, which is still available electronically for personal use.

The Apple Pushers, a documentary film designed to raise public awareness about the national issue of food deserts and their impact on low-income communities, details the development of the NYC Green Cart Initiative and highlights the lives of several Green Cart vendors. The Apple Pushers debuted on public television in May 2012 on the WORLD network (formerly PBS World) and is now available on iTunes and Netflix. It is also being screened across the country as part of an effort to catalyze organizations and policymakers to create new strategies to improve access to healthy foods.

The NYC Green Cart Photography Commission through the Aperture Foundation commissioned five emerging photographers to spend a year in the field getting to know vendors and their families, customers and the local neighborhoods’ challenges. Photographs from this commission also appeared in Moveable Feast, a photography exhibit at the Museum of the City of New York that also featured New York street vendor photos spanning 100 years. During its five-month run, nearly 90,000 people visited this exhibit, and hundreds of teachers, students and members of the general public attended related educational programs. The exhibit was augmented by 9 public programs (panel discussions, events and family workshops), student activities, and 7 professional development sessions serving a total of 160 teachers.