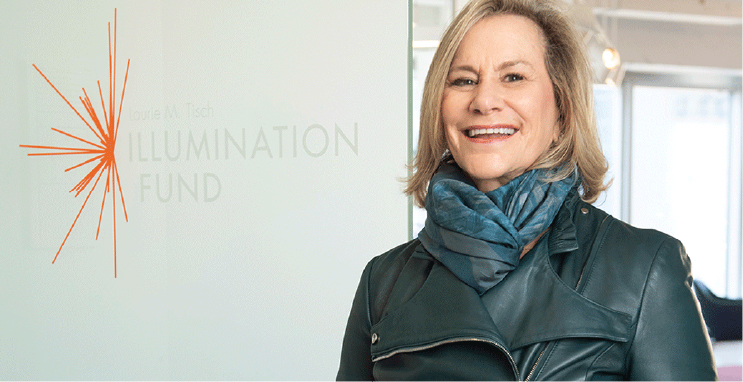 Laurie M. Tisch is the President of the Laurie M. Tisch Illumination Fund, which strives to increase access and opportunity for New Yorkers. Ms. Tisch’s philanthropy stems from her family’s legacy of giving in New York City, from years of experience serving on boards, building institutions, and developing partnerships, and from an engaged civic life.

Ms. Tisch is Chair Emeritus of the Center for Arts Education (CAE) and the Children’s Museum of Manhattan (CMOM). She led CMOM’s transformation and expansion from a neighborhood-based storefront into a citywide institution that is now recognized as a national leader in health, education and the arts. Currently, she is co-chairing a capital campaign to build a new home for CMOM on Central Park West and 96th Street.

Ms. Tisch is a recipient of many awards for philanthropy and public service. In 2018, she received the Key to the City at Gracie Mansion. She was named one of the “50 Most Powerful Women of 2017” by Crain’s New York Business, and in 2020 Avenue Magazine named her as one of its Power 50 in the category of Philanthropy. She received a Lifetime Achievement Award from the New York Foundation for the Arts, the United Way of NYC’s 10th Anniversary Power of Women to Make a Difference award, and the New York Women’s Foundation’s leadership award. She was honored with Share Our Strength’s “No Kid Hungry” Hero Award and New York City’s Special Merit in Public Health Award for her initiatives promoting access to healthy foods in low-income communities. She has also received the Lincoln Center Distinguished Service Award. She has an honorary doctorate from Yeshiva University. In 2022, Ms. Tisch was a co-producer of A Strange Loop, winner of the Tony Award for Best Musical.