Unveiling The Spirit of Sea View

In January, the final mural of New York City Health + Hospitals 2020 Community Mural Project was unveiled. Although the celebration was delayed by the pandemic, the Sea View staff and guests from NYC H+H, the Illumination Fund and the Staten Island community celebrated the mural with an unveiling and small gathering.

The Story of Sea View

The mural titled “The Spirit of Sea View” is located at historic Sea View Hospital (now NYC Health + Hospitals/Sea View) in Staten Island. It was developed through the support of NYC Health and Hospitals and the special program titled “Arts in Medicine Program” and Residency Unlimited, with the generous support of the Laurie M. Tisch Illuminated Fund.

This work was developed after a thoughtful exchange and collaboration with local community members, staff and nurses at the hospital. The Sea View Historic site is precisely where major advances were developed towards the development of the TB vaccine. Much of the history was preserved at the Sea View museum, thanks to the staff and community.

To capture the rich history of Sea View, the mural is divided into 4 parts and each has a different historical theme: 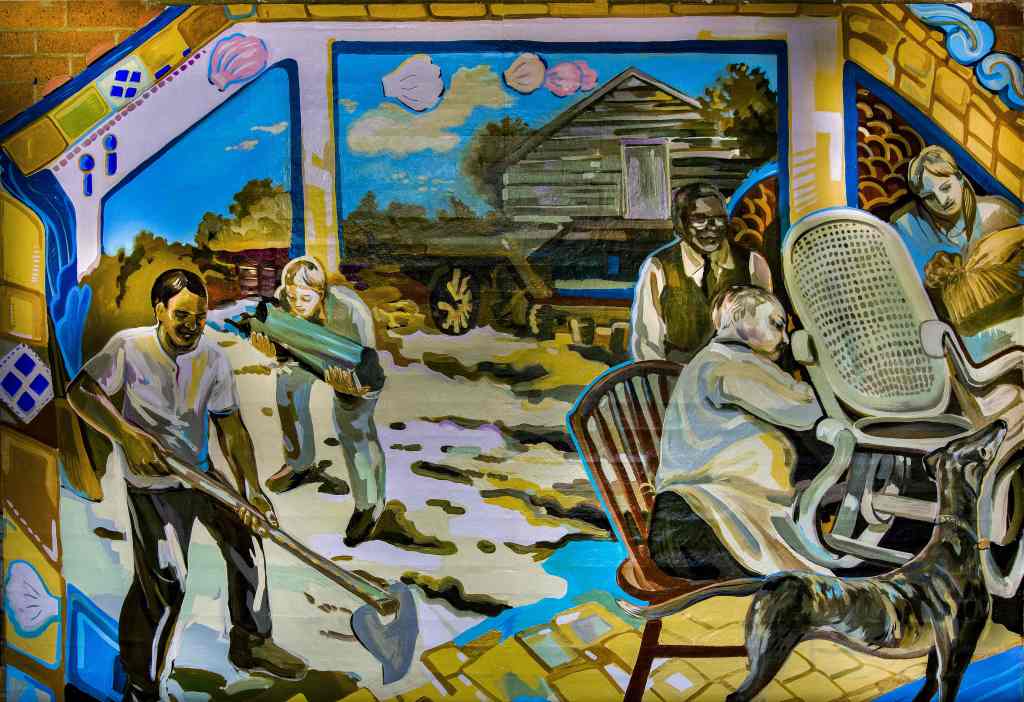 Panel 1: Captures the period of the foundation of the site as a Farm Colony established in the 1830s. People who were experiencing hardship in the city were welcomed at the farm, where they lived and worked, while gaining valuable skills in farm and craft work. 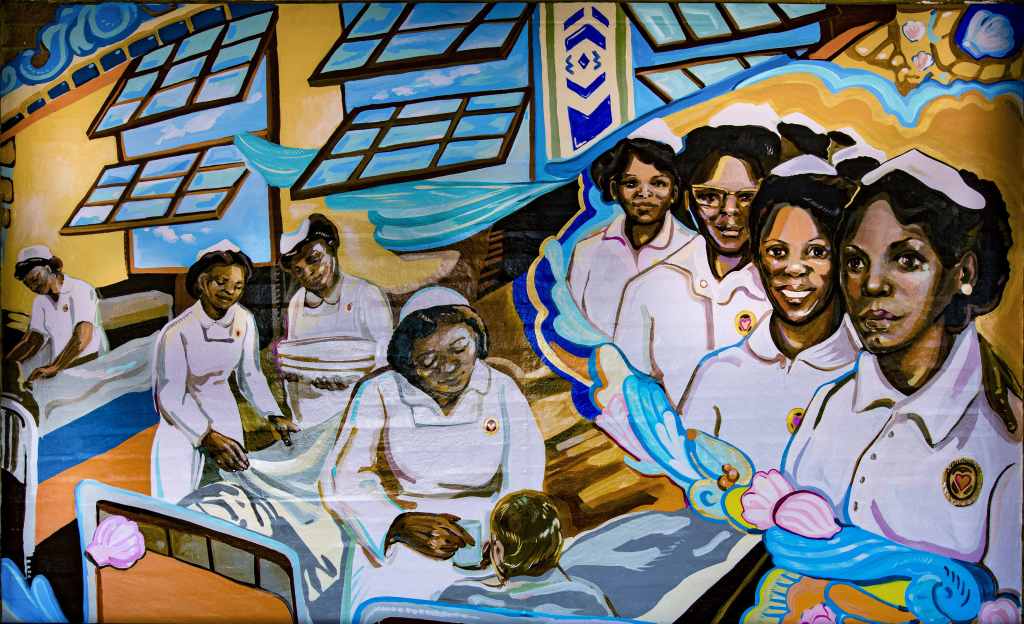 Panel 2: Captures the legacy of the Black Angels. In the early 1900s part of the Farm Colony was transformed into one of the most expansive tuberculosis sanatoriums. The hospital served and housed the numerous patients, while doctors on site were conducting research on the disease. At that time, nobody knew what this respiratory disease was and how to cure it ( sound familiar?) and many of the nurses who worked there left. In search of care workers, the hospital brought hundreds of African American nurses from all over the country, provided training and employment in an unsegregated workplace. The nurses carried on the legacy of extremely kind and caring, and they were given the title the “Black Angels” by the patients themselves. Their legacy continues on and until today, there is one last living Black Angel, Miss Virginia Allen, who lives within the complex of the Sea View Historic Site. After speaking with Miss Allen and meeting her in person, it was so beautifully clear – she is an inspiring fighter for social justice for the not only the community at the hospital but also all over New York City. I am honored to have had the privilege to meet her and speak with her in preparation of this panel. Sharing the story of the Black Angels, through images of gestures of care, while bringing portraits of the nurses themselves within it.

Panel 3: The Fight Against Tuberculosis 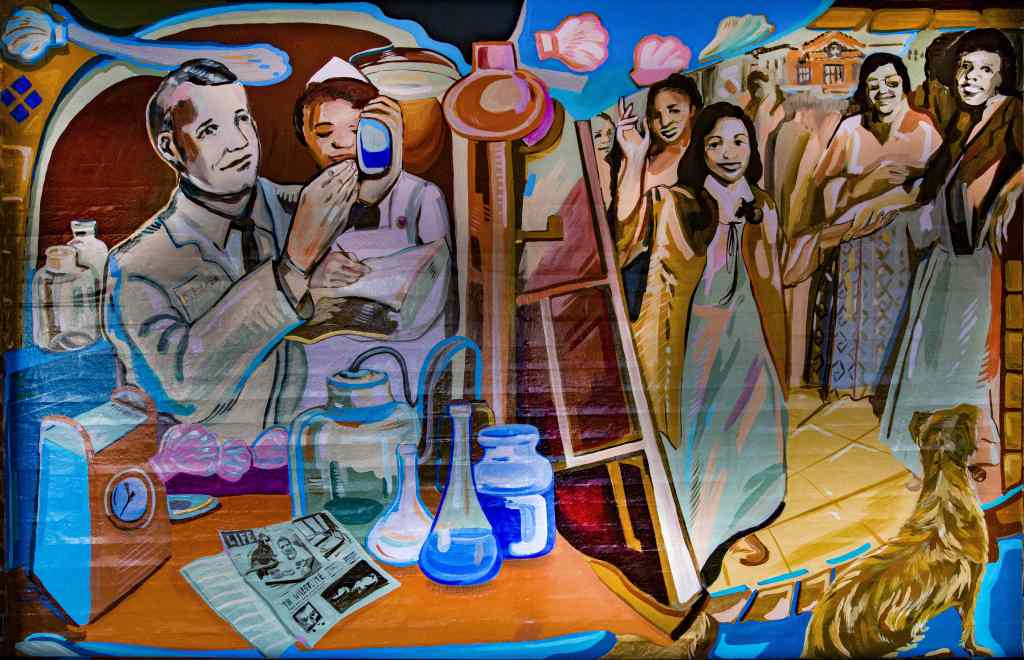 Panel 3: Dr. Robitzek made major advancements forward in the research of tuberculosis (TB), he was one of the developer of what was considered at that time the cure for TB. In this panel, I included his image and the Back Angels again assisting him for the task. In the right top corner is also the first cured patient, in a patient’s dance celebrating good health with the Black angels and rest of the nurses. 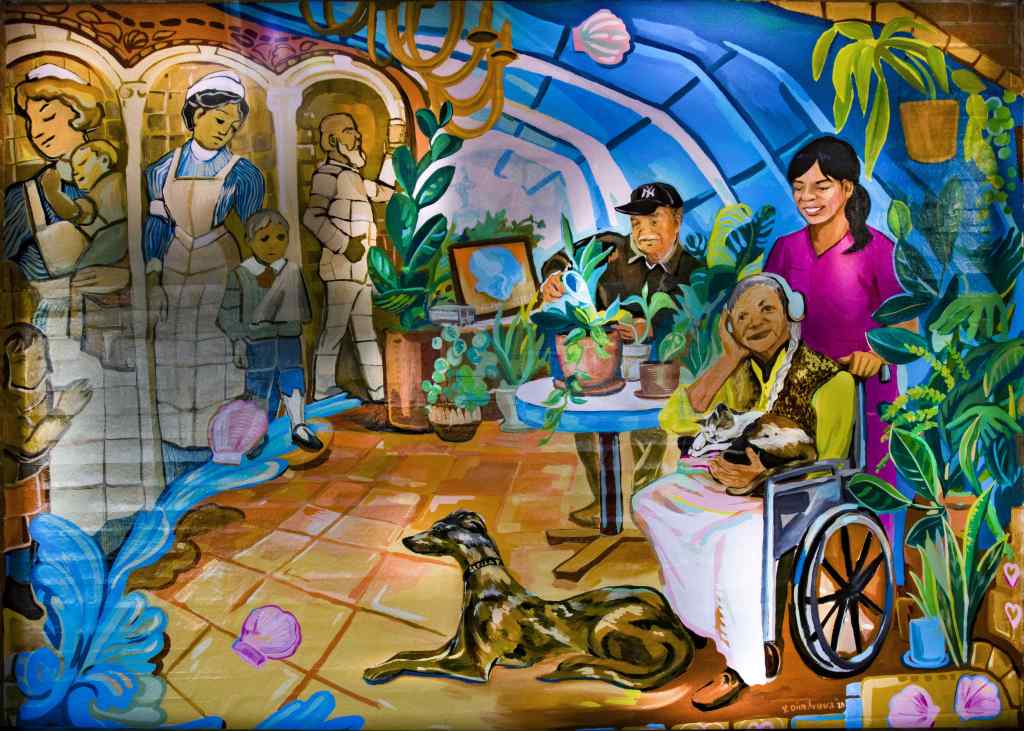 Panel 4: The last panel is about today. It incorporates an image of a patient today, with the greenhouse space, and many elements of the historic tile pieces which originally hung in the entrance of the building. These images were extremely important to the community, originally made by a brilliant Dutch studio in the 1890s that still exists today preserved in the Sea View Hospital Museum.

Photos and video by Michael Paras