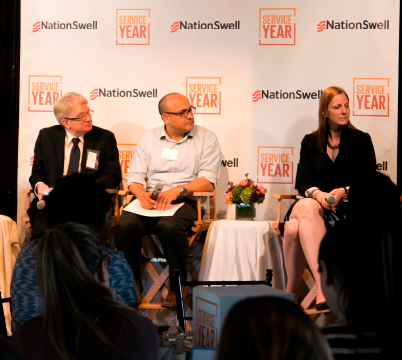 The Illumination Fund’s Service initiatives included support for a national mobilization and infrastructure to bring together many service-based organizations along with government officials, and multiple initiatives in New York City in partnership with City agencies and nonprofits.

The Laurie M. Tisch Illumination Fund was an inaugural funder and supporter of NYC Service’s Civic Corps, which is now entering its tenth year. Civic Corps focuses on volunteer management and has served 50 organizations each year with 100 members and supported 50,000 new and active volunteers each year.

Using our Civic Corps experience and the advice of the Expanding NYC Service Years Committee, NYC Service designed and launched a new Service Year program, City Service Corps, to support city agencies in direct service and outreach. This program is entering its fourth year, with 70 members in 17 city agencies. A total of 380 members have impacted the lives of 600,000 New Yorkers in the first three years.

Since 2014, Rick Luftglass and the Illumination Fund have been an active thought leader on efforts to create new service year program models and build a citywide coalition of service year organizations, including other programs funded by the Illumination Fund.  In 2015, our Expanding NYC Service Years Committee inspired the design and launch of City Service Corps. As an active member of the Expanding NYC Service Years Committee, Rick Luftglass’ suggestion to secure support from the City’s Office of Management and Budget was a key to the new City funding model.

On February 29, 2016 (Leap Day), our Leap into Service Summit led to the NYC Service Year Leadership Council, a coalition of 40 organizations working together on growth and impact of Service Year programming.  The Illumination Fund supported the design of our new brand – NYC Service Year. Do More. Be More, and our awareness campaign.

The Laurie M. Tisch Illumination Fund is an inspiration and a leader in the service year movement through its ladder of program, citywide and national support.

In 2019, the Urban Institute published the results of an evaluation of the Civic Corps program.  According to the authors:

The evaluation found that NYC Civic Corps sites report significantly greater benefits from volunteers than the control group and that they tend to place a larger dollar value on service provided by volunteers. Other key research findings include:

Although volunteer retention is a concern for NYC Civic Corps sites, the site representatives credit members for contributing to volunteer trainings and management plans.

NYC Civic Corps sites are more appreciative of the specialized skills that volunteers bring to the table and are more likely to entrust volunteers to manage other volunteers.

NYC Civic Corps members generally met the expectations of the partner sites, contributed to the capacity and goals of the partner organizations, and appear to have made volunteers more effective.

Overall, the study reveals that NYC Civic Corps members benefited their host sites and helped the sites manage additional volunteers, enabling them to improve procedures for volunteer recruitment and management.